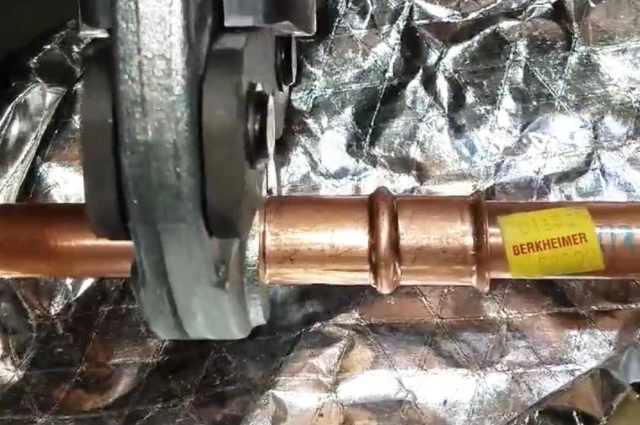 While Corey VanDeVanter of Handy Vanter Mechanical, LLC spent many years brazing joints like many HVAC contractors, he recently discovered the speed and convenience of the RLS press-to-connect technology. As a result, this timesaving and much safer alternative to brazing has helped his company win more high-end commercial projects, like a new system installation for a medical facility.

Handy Vanter Mechanical’s challenge on this project was to install 3 separate split systems (one 10-ton and two 4-ton) in a ceiling directly above MRI equipment worth millions of dollars. Avoiding damage to the equipment was going to be critical, but that was only one part of the cost concern.

Every minute of downtime on the MRI machines represented a significant cost to the medical facility, so completing the HVAC work quickly was absolutely necessary to get the MRI department back up and running as soon as possible. Using RLS press fittings, VanDeVanter was able to meet the project’s critical time requirements.

“RLS fittings definitely saved me time and money on this job,” says VanDeVanter. “Now that I’m using the RLS system, I’m in and out of jobs so much faster. I don’t have to drag my acetylene tank in and out of the truck and up and down stairs. It’s a quicker setup, and the pressing process is so much faster than brazing, especially in tight spaces.”

In this case, time really did translate into money. VanDeVanter believes he was able to win the job by offering a faster turnaround and lower cost than the companies he was competing against, which were planning to braze. “By using RLS press fittings, we were able to limit the number of installers on the job…and still get it done quickly. We had 4 projects booked that day, so being able to move technicians to other jobsites was a big help in getting our other work done.”

“I know this saved the medical facility a lot of money, and as a result, we got the job,” said VanDeVanter. “In the end, we were actually able to complete the project faster than I originally quoted, and in about half the time compared to brazing. The customers were very happy with the results, as they were able to get their MRI machines back in service quickly.

This project is just one example of how RLS fittings are paying off for VanDeVanter and giving him the ability to win more projects – and get more jobs done. “When I can send two technicians to two different jobsites rather than one, that increases our sales. Savings for our customers and a growing business for us…that’s a win/win,” said VanDeVanter.

A Safer Alternative to Brazing

Safety, of course, is also a major issue – and was particularly so on this project to help ensure that very expensive MRI equipment would not be damaged. In addition, the line sets from the ceiling units ran through an attic with 12″ of insulation where joints were required. So, making connections without an open flame in that area was another big benefit.

“The facility management’s fear of damaging the MRI units, and of exposing the building to a fire hazard, was very high,” VanDeVanter said. “I was able to put those fears to rest with a completely flame-free solution, which worked perfectly for this job because many of the joints were near valuable equipment, in very tight spaces and around insulation.”

Introduced in 2015, RLS press fittings are UL207 listed for field installation for pressures up to 700 psi. The press tool creates a permanent and reliable mechanical connection in just 10 seconds, eliminating the need for brazing. In addition to creating a safer work environment, removing the danger of an open flame also removes the need for hot work permits, fire spotters and nitrogen purging.

“The RLS press fittings have helped me in a number of cases,” VanDeVanter said. “I believe their ease of use and time savings are the biggest reasons to use them. But there are a number of other important benefits too, like the safety issues and the cleanliness of the joints. I will definitely be using RLS fittings on future projects!”

Handy Vanter Mechanical, LLC performs all types of industrial, commercial and residential HVAC and refrigeration work in and around the Indianapolis, Indiana area. For more information, contact Corey VanDeVanter at handyvanter@yahoo.com.